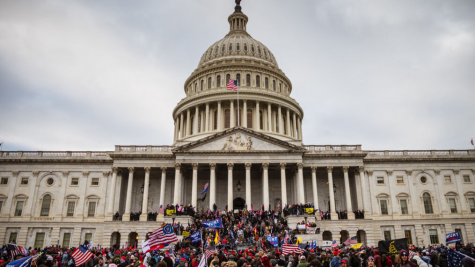 On January 6th, 2021 our United States Capital, located in Washington D.C. was stormed by rioters. The invasion of the capital was a riot/violent attack against the United States congress that was carried out by a mob of U.S. Trump supporters. They committed this act in an attempt to overturn his defeat in the 2020 presidential election. Thousands of pro-Trump supporters after leaving the rally marched down Pennsylvania Avenue towards the capital. They breached police perimeters, then proceeded to occupy, vandalize, and loot the building for several hours. In the end, the riot lasted from 6 am to around 8 p.m. when congress resumed voting. Tragically, 5 people died.

When asked how she felt about the riot, Palmer senior Viviane Grundei stated that she found the riot “frustrating mostly”. When I asked her why she felt frustrated she replied with “I was frustrated because a group of people who were frustrated at the voting results for supposedly being ‘erratic and against democracy’, were performing domestic terrorism because they didn’t get their way. I also got frustrated because the Black Lives Matter protesters were protesting peacefully and yet the police were being aggressive. Yet when these people stormed the capital they didn’t do it peacefully but the police were not violent towards them.”

Following my interview with Viviane I also got to interview senior Taylor Williams to see how she felt about the riot. When asked how she felt Taylor stated “I found it weird”. When I asked her why she replied “I found it weird that they (police) didn’t do more”. When asked the follow up question on what she was expecting she replied “I definitely expected them to treat it more serious at the start, instead of waiting for the rioters to penetrate the walls and letting them become violent before ‘trying’ to do something about it”.

After I got some student insight, I decided to get some insight on the event from one of Palmers science teachers Mr. Hagen. When asked how he first felt about it he stated “when I first heard about it, it was kind of like 9-11 in the aspects of I couldn’t really believe it. I was like oh no, they’re not doing that, and then I figured that there was going to be trouble, and then I was very surprised that they would actually break into the capital, and not just protest”. When asked what the people and government could have done to handle the situation better he replied with “I would have thought that our government would have been more prepared considering the riots that have happened over the past year”.

At the end of the day, the capital riot has had an impact on everyone in at least one way or another. Whether you feel frustrated, weird, or are in a state of shock, we should all be open to learn and come together as a nation to over come this obstacle in our history.